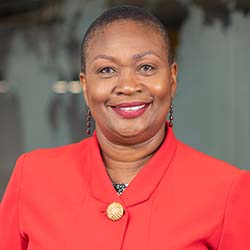 SKILLS AND EXPERIENCE: Rita is currently the Managing Director of Isuzu East Africa Limited (formerly General Motors East Africa), the largest motor vehicle assembler in East Africa. She joined General Motors in 1995 and has held several key roles in Sales & Marketing, both in Kenya and South Africa. She is also an executive coach certified by the Academy of Executive Coaches (AOEC) UK. In 2017, she was awarded the Moran of the Order of the Burning Spear (MBS) for exemplar y service to the Country as a business leader.

She holds a bachelor’s degree in Education from Moi University (Kenya) and a master ’s degree in Business Administration (MBA) from the University of Nairobi.

SKILLS AND EXPERIENCE: Crispin most recently worked for the Kimberly-Clarke Corporation where he held the position of General Manager; West, East & Central Africa (WECA) and Managing Director Nigeria.

KEY APPOINTMENTS: He is currently also the Cluster Director for BAT East Africa, based in Nairobi. 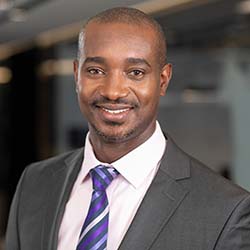 POSITION: Executive Finance Director since May 2020.

SKILLS AND EXPERIENCE: Philemon has been with the BAT Group for 14 years. He joined BAT Kenya in 2007 from Pricewaterhouse-Coopers (PwC) as Internal Audit Manager. He has subsequently held various senior finance management roles within the BAT Group, including; Finance Controller BAT Uganda & Big Ben Tobacco DRC, Finance Controller & Head of Operations Finance - BAT East & Central Africa and most recently, Head of Finance for BAT Horn of Africa & Indian Ocean Islands.

He holds a Bachelor of Technology degree from Moi University and a master’s degree in Business Administration (MBA) from Oxford Brookes University – UK. He is a fellow of the Association of Chartered Certified Accountants (ACCA).

KEY APPOINTMENTS: He is a Non-Executive Director of British American Tobacco Uganda Limited (a company listed on the Uganda Securities Exchange), a Director & General Manager for BAT Eritrea Limited and Chair of the Board of Trustees of the BAT Kenya Staff Provident Fund.

POSITION: Non-Executive Director since February 2011 and a Member of the Audit, Governance and Corporate Social Responsibility Committee.

SKILLS AND EXPERIENCE: Carol is a Lawyer by profession. She has over 10 years of Financial Leadership and Legal experience working in Kenya and the United States. Her Executive Management experience includes her role as the Corporate Director of Barclays Bank of Kenya Ltd.

She currently provides consulting and training services for various local and international commercial banks and insurance companies. She is also a popular weekly columnist in the Business Daily.

KEY APPOINTMENTS: She is a Non-Executive Director of East African Breweries Limited and chairs the Board of the Business Registration Services under the Attorney General’s Office.

POSITION: Non-Independent Non-Executive Director since May 2020

SKILLS AND EXPERIENCE: André joined the BAT Group in November 1999 and is currently the Area Director, BAT East & Southern Africa. He has over 16 years’ experience in various senior finance and management roles having worked as the Regional Head of Finance, East Europe, Middle East & Africa; Area Director, Caucases & Central Asia; General Manager, Southern Africa Markets; Chief Finance Officer, Bentoel Investama (an Indonesian listed company), among others. Prior to his current role he was the Regional Head of Finance, Americas & Sub-Saharan Africa based in the United Kingdom. He brings a wealth of experience having worked in the tobacco, mining, banking and audit industries and across several jurisdictions notably the United Kingdom, South Africa, Indonesia, Switzerland and Zimbabwe.

KEY APPOINTMENTS: He is the Area Director of BAT East and Southern Africa Area.

He has over twenty years of proven business and leadership experience. He holds a Bachelor of Science degree in Electrical Engineering from the University of Nairobi and is also a CFA® charter holder. Additionally, he is a member of ICPAK, ICPSK and KIM.

KEY APPOINTMENTS: He serves on the Board of Directors of the Central Depository and Settlement Corporation (CDSC), Funguo Investments Limited and as an Executive Director on the boards of several subsidiaries of the UAP Old Mutual Group in East Africa.

POSITION: Non-Executive Director since August 2016 and a Member of the Audit, Governance and Corporate Social Responsibility Committee.

SKILLS AND EXPERIENCE: Martin is currently an independent Business Advisor and Executive Coach. Prior to this he worked with Deloitte East Africa as Partner and he also worked in the Financial Service Industry from May 2013 to December 2015.

He had an illustrious career at Kenya Commercial Bank Group between October 2005 and December 2012, initially as Deputy CEO and then as Chief Executive Officer. He has held Senior positions in Barclays Bank of Kenya Limited and in the Public Sector.

POSITION: Independent Non-Executive Director since May 2020

SKILLS AND EXPERIENCE: Marion is currently the Managing Director of BOC Kenya plc, the leading gases and engineering solutions company in Kenya and a company listed on the Nairobi Securities Exchange (NSE). Prior to her current role, she served as the Head of the Association of Certified Chartered Accountants (ACCA) - Kenya. She has over 20 years of local and international experience in commercial and general management, predominantly in manufacturing. She has previously served as the Country Head, Groupe Lactalis – Parmalat Botswana (Pty); Country Director, Cadbury Kenya & East Africa Limited; General Manager, Unga Limited and had a distinguished career with Bayer East Africa.

She holds a Bachelor of Science (Honours) degree in International Business Administration from the United States International University (USIU) Kenya.

KEY APPOINTMENTS: She is a long serving Trustee of the Palmhouse Foundation (an education trust), a Member of Women Corporate Directors and a Council member of Superbrands East Africa.

POSITION: Non-Executive Director since July 2019 and a member of the Nominations and Governance Committee.

SKILLS AND EXPERIENCE: Dr. Irungu is the Managing Director of Gulf Africa Petroleum Corporation Kenya Ltd. He has over 28 years’ experience in various senior management roles within the oil industry and Testing Laboratory, in and outside Kenya.

KEY APPOINTMENTS: He holds Directorships at the Energy & Petroleum Regulatory Commission, Total Kenya Ltd, Petroleum Institute of East Africa and is a Board Member of KAG University Council.

POSITION: Non-Executive Director since July 2019 and a member of the Audit and Risk Committee.

SKILLS AND EXPERIENCE: Samuel is the immediate former CEO of Deloitte East Africa. He has extensive audit experience, having served for 38 years in various audit roles and has contributed to the development of the accounting profession in East, Central and Southern Africa through past roles; including as Chair of the Institute of Certified Public Accountants of Kenya and president of the Eastern, Central and Southern Africa Federation of Accountants, which he represented in the Council of the International Federation of Accountants.

KEY APPOINTMENTS: He is a Director at Jadala Investments Ltd 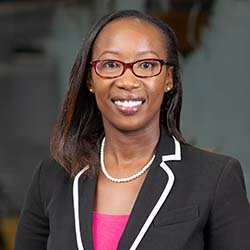 SKILLS AND EXPERIENCE: Kathryne is a Partner at Stamford Corporate Services LLP, part of Bowmans Coulson Harney LLP. She is recognised as a leading expert in corporate governance matters having advised leading corporates in the public and private sector for over 15 years.

She is an Advocate of the High Court of Kenya, a member of the Law Society of Kenya, a registered practicing Certified Public Secretary and an Accredited Governance Auditor with the Institute of Certified Secretaries - Kenya. She has been recognised as a leader in society and named as Top 40 under 40 Women in Kenya.